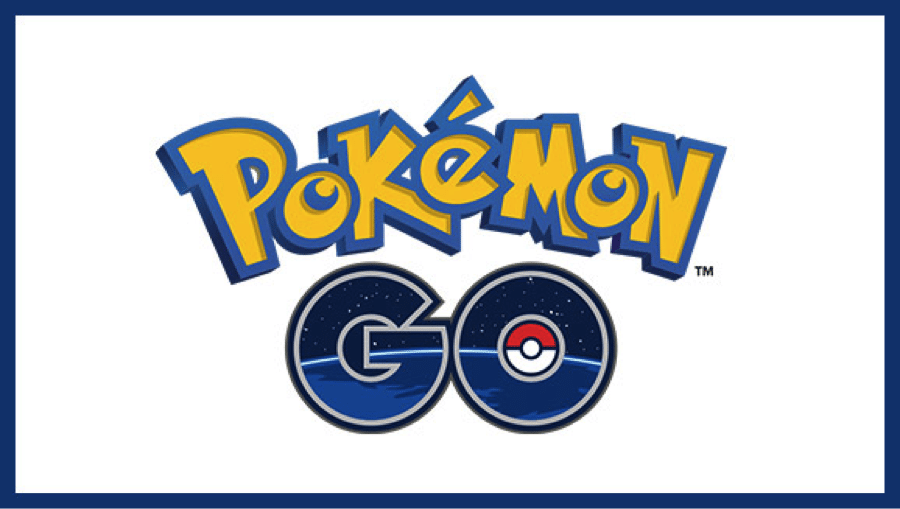 There’s no denying it. The Pokémon GO craze has taken hold and even those who don’t play the game find themselves living in Pokémon World. Thanks to the game’s augmented reality technology, these animated creatures are now popping up in real-life locations – parks and sidewalks, your living room, even in cups of coffee or rather apropos locales! 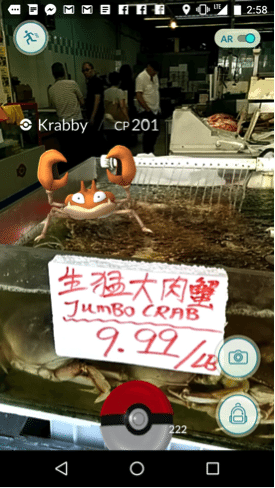 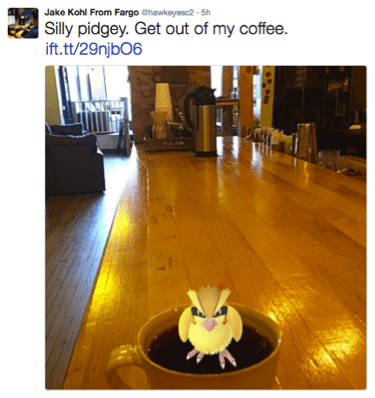 With an initial release on July 6 to Australia, New Zealand and the United States, Pokémon GO quickly rose to the top of both App Store and Google Play. By July 9, it had surpassed Twitter in user numbers. The app was not officially released in Canada until July 17, but that didn’t stop thousands of eager and savvy Canadians from figuring out ways to download it alongside their American counterparts. Pokémon GO may be just a game, but it should not be taken lightly.

Whether you’re a fan of Pokémon GO or you think it’s a social nuisance, as a small business owner, the smart play would be to embrace it. Think of yourself as a Pokémon trainer who’s trying to ‘catch’ as many customers as possible. Here are five ways you can make Pokémon GO work for you:

Take advantage of opportunities to identify your products with a trendy topic. A Vancouver Starbucks location realised this possibility soon after the app was released. Each Pokémon GO player starts off as a level one trainer, but once they advance to level five, is asked to pick a team – each represented by a different colour. Trainers take particular pride in their teams and in an augmented reality turf war, battle to claim as many Pokémon Gyms as possible.

Seeing that their Frappuccinos can be made into a wide range of flavours with coordinating colours, this Starbucks location joined in on the fun: 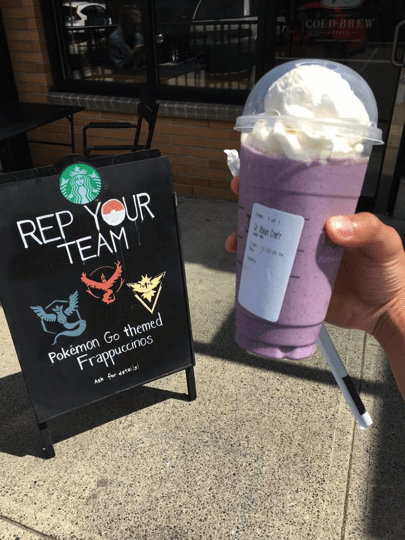 The only cost to do this was the amount of time it took to draw the sandwich board and a few pieces of chalk. This simple, yet creative, idea serves multiple purposes:

A major element of Pokémon GO is the PokéStop. PokéStops are the game’s equivalent of free convenience stores. PokéStop markers can be found anywhere – but most commonly at points of interest, public art displays, and landmarks. Trainers can visit these locations and by merely swiping at a circle displayed on their mobile devices, collect essential items needed to advance in the game – be they Poké Balls, potions to heal Pokémon with, Pokémon eggs, Pokémon lures, and more!

Sometimes, these locations are clustered, offering trainers the ability to visit multiple PokéStops by standing in the middle of all of them. PokéStops can also be ideal locations to catch many Pokémon in a short amount of time. This is achieved by installing lures into the location markers. As their name implies, lures attract Pokémon to the surrounding area. Each marker can be loaded with one lure at a time and each lasts for 30 minutes. So you can understand why so many people have been seen loitering at random locations lately – they are trainers looking to maximize their game play. 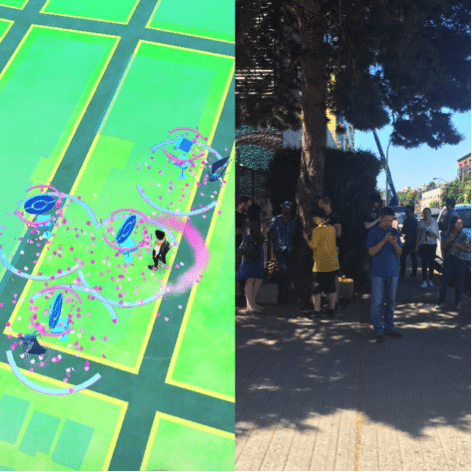 If your business happens to be near or on a PokéStop – or better yet, a cluster of them – you can use this to your advantage. Even if you don’t play Pokémon GO, it is easy to download the free app and at a relatively low price, purchase lures to use in PokéStops near your business. A set of eight lures costs 680 PokéCoins and PokéCoins can be acquired through in-app purchases (prices vary depending on how many you purchase, but as an example, 1,200 PokéCoins cost $13.99).

Once the lures are purchased, all that’s required is someone to install the lure(s) and announce it on social media. Between that and players seeing where lures are activated on their devices, you will most likely see an instant increase in foot traffic.

Okay, so you drop the lures and get a ton of people swarming outside your business, but what you really need to do is get people in the door. Consider offering players a discount if they can prove they’ve reached a certain level in the game. A business in Burnaby posted a tiered discount system on Facebook and in one week, the post had 326 reactions, 193 shares and 222 comments. 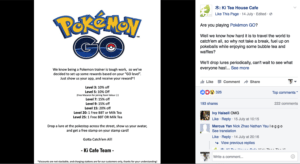 Another idea is to offer discounts to patrons who take screenshots of wild Pokémon found in your store or restaurant and post them on social media with a tag to your establishment.

With a little planning, your business can host a lure party. Pick a public location with multiple PokéStops and get your plan okayed by the necessary authorities. Then promote your event on social media and announce a time period during which you will set off lures in succession. Bonus points if you’re able to offer up free wifi and and power outlets so players can give their data plans and device batteries a lifeline.

Enroot – a local start-up that specialises in mobile food deliveries – did just that and the result was highly successful! 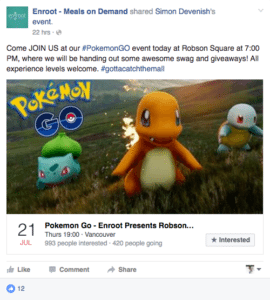 Niantic CEO John Hanke confirmed to the New York Times that the company would soon be announcing sponsored game locations – allowing local businesses that aren’t already listed as PokéStops or Pokémon Gyms to join in on the craze. The details are still murky but it shows Niantic recognises further revenue stream opportunities for both themselves and participating businesses. A pricing structure has not been announced; but the feature will reportedly be run through Google AdWords with sponsors being charged on a per-visit basis.

In all, embracing Pokémon Go is an easy way to attract more business at relatively low costs. The more fun you have with Pokémon GO, the more customers – and profits – you’ll catch.